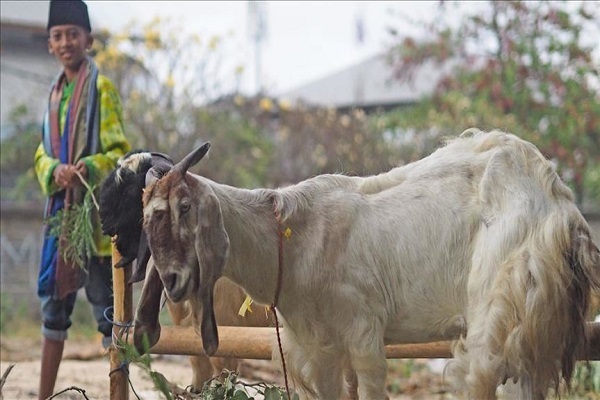 The aim is to protect public health amid the foot-and-mouth disease (FMD) outbreak.

Officers and the public must pay attention to the health protocols while joining Eid al-Adha prayers as well as the health of the animals used for Qurbani, Religious Affairs Minister Yaqut Cholil Qoumas said in a statement released here on Saturday.

The directives also regulate the conduct of other activities related to the celebration of the Muslim holy day, including the chanting of “God is the greatest" simultaneously (locally known as takbiran) as well as giving sermons.

In addition, the guidelines include the technical implementation of the slaughter, skinning, chopping, packaging, and distribution of Qurbani animals.

Performing Qurbani on Eid al-Adha is sunnah muakkadah, which means that the activity is strongly recommended, the minister noted.

However, Muslims have been advised to not force themselves to perform Qurbani amid the FMD outbreak.

Qoumas appealed to all Muslims to buy animals that are healthy without any defects to meet the Qurbani criteria.

He also asked the Ummah to take care of their Qurbani animals well until the holy day.

Meanwhile, people living in areas with high FMD infection rates are advised to perform Qurbani at slaughterhouses (RPHs), he said.

"They can also entrust the purchasing, slaughtering, and distribution process of the animals to the alms agency," he said, adding that the Eid al-Adha prayers have been allowed to be held in mosques or open fields under health protocol compliance.

Thus, all mosque managers are required to deploy officers to ensure the dissemination and application of the health protocols.

"The public is appealed to carry out the takbiran on the eve of Eid al-Adha and tasyrik days (three days after the holy day) at mosques or their respective homes," the minister said.