General
News ID: 3459148
TEHRAN (IQNA) – The Corpus Coranicum project researchers have in the past two years analyzed manuscripts of the Quran by means of carbon 14 method in order to date them somewhat precisely.

This is according to Michael Marx, German researcher of the Berlin-Brandenburg Academy of Sciences (BBAW) and manager of the project called Corpus Coranicum, which is currently underway at the academy. 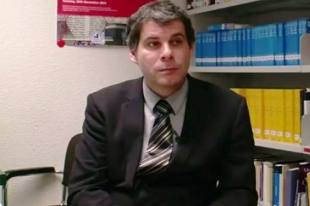 A few weeks ago Marx visited Iran to give a couple of academic lectures on Corpus Coranicum, the project’s latest findings, analyses of old Quran manuscripts and use of empirical methods, in particular carbon dating, to study the history of the Quran.

IQNA conducted an interview with the researcher during his visit to Tehran on the carbon dating of the Quranic old manuscripts and some other relevant issues.

Following is a rough transcription of the interview:

When I wrote the proposal of the precedent German-French project under the name of "Coranica”, I wanted absolutely to have some budget and facilities required for carbon dating in a systematic way. We are not the only ones who did such analyses. Before our project started, there were about ten times that manuscripts had been carbon dated. The first one was in London in 1992.

Carbon dating is a technique that has been well accepted in the world in realm of archeology. It was discovered after the Second World War II by an American physician, Willard F. Libby, who received the Nobel Prize. It is accepted worldwide and often applied by the discipline of archeology to study early history, pre-history, etc.

Carbon dating allows determine the date of materials that were beings, living creatures like animals, plants, as well as organic materials except for fishes. We, like other living beings, are eating, drinking, breathing, so in permanent exchange with the environment.

Libby found out that since we are in chemical interaction with our environment, we are permanently taking carbon, the element that is abbreviated C in chemistry. It has 3 isotopes, C14, C13, and C14. The number shows that of neutrons in the atom core. We have percentage of radioactive carbon 14 in our body. 99 percent of what we receive in carbon has regular C12, and very small percentage (0.8) belongs to C13. The tiny radioactive one is produced in the atmosphere around the earth by cosmic beings. When we die, the radioactive carbon stops being added to our body. In autopsy, it can be measured out how much C12, C13 and C14 is available in relation to the time as the rate is stable between the three.

Measuring the amount of C14 in a sample from a dead plant or animal provides information that can be used to calculate when the animal or plant died. The older a sample is, the less C14 there is to be detected, and because the half-life of C14 (the period of time after which half of a given sample will have decayed) is about 5,730 years, the oldest dates that can be reliably measured by radiocarbon dating are around 50,000 years ago.

There is always some kind of error in measurement. At present there are 12 laboratories in the world which exclusively deal with carbon dating analyses on a regular basis, including Tubingen, Leiden, Berlin, Lyon, Birmingham, Oxford, Zurich, etc.

Radiocarbon dating, which is also referred to as carbon dating or carbon-14 dating, is a method for determining the age of an object containing organic material by using the properties of radiocarbon C14, a radioactive isotope of carbon. The technique is good for everything between 300 and 50000 years old.

The material analyzed is usually parchment, papyrus and wooden sticks. In our studies during the past two years we analyzed Arabic, Syrian, Georgian, Coptic manuscripts of Quran, comparing them in order to date them more precisely. The process usually takes 5 to 6 months. We dated around 120 analyses from 20 Quran manuscripts that mainly pertain to the first millennium between 400 and 900 AD.

If the reader is the enemy of a library, radiocarbon dating is the enemy of the collections because the researcher has to cut out few centimeters of the manuscript for dating. Each experiment costs about 500 euro.

There are some problems affecting the accuracy of carbon dating such as destruction of a tiny part of manuscript, danger of material contamination, application of solvent, regional peculiarities, environmental and climate changes, etc., which sometimes give rise to ambiguity when it comes to the results of carbon dating. For example, Quran manuscripts carbon dating related to the time of the Abbasid dynasty has led to problematic and inaccurate results apparently due to some environmental factors.

It is worth noting that Corpus Coranicum was created in 2007 by the Berlin-Brandenburg Academy of Sciences, with the goal of completing three objectives by 2024: